17 Aug Attack On the Pacific 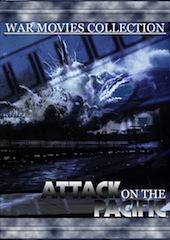 Click here to watch Attack On the Pacific now

This dramatic documentary, an Armed Forces Information Film, completed a year before the war’s end, is dedicated to the men of the United States Navy, a fighting organization which fulfilled a most significant role in bringing about the defeat of Japan; the combat footage, although propagandistic, is startling.