07 Nov As Far As My Feet Will Carry Me – Review

FlixFling contributing reviewer Rebecca Raymer covers As Far As My Feet Will Carry Me – the true story of a German soldier’s dramatic escape from a Siberian labor camp after World War II: 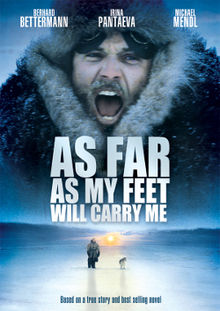 ‘The Power of Hope”

As Far As My Feet Will Carry Me (2001, starring Bernhard Bettermann and directed by Hardy Martins) is a saga based on an incredible true story. This intensely brutal and striking film carries the viewer along a nearly seamless path of terror, suspense, and hope.

French-born Bettermann maintains a relentless dedication to his portrayal of the film’s primary protagonist, Clemens Forell. The character’s mental state exceedingly declines and recovers a number of times throughout the story, and Bettermann captures the range beautifully. Bettermann is also beautiful, a fact that certainly does not hinder the enjoyment of watching the film.

The cold, dark atmosphere of Nazi camps and soldiers is presented in a way that is no better and no worse than it has been in countless other films. The brutality and isolation of Siberia, however, and the mental and physical effects of prolonged human exposure to the conditions of Siberia, are portrayed powerfully.

The range of emotion this film elicits is amazing. There is not a dull moment; each frame is infused with suspense. The intensity of fear, pain, and loneliness throughout the film set the stage magnificently for the full effect of the conclusion. The gratitude of being alive and being with the people you love is presented here as the greatest achievements anyone can attain as a human being.

As Far As My Feet Will Carry Me showcases the tremendous value of love and loyalty while taking its audience on an exhilarating theatrical journey; it is absolutely worth the 126 minutes it takes to watch.

Click here to watch As Far As My Feet Will Carry Me now on FlixFling.  Rate the film and write your review.

As Far As My Feet Will Carry Me