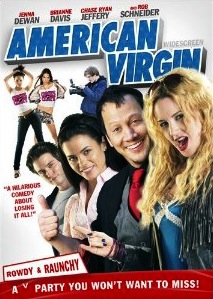 “More nipples than you can shake a stick at”

This 2009 coming-of-age film is an adorable depiction of how ridiculous a vow of chastity is in American society. Written by Jeff Seeman, directed by Clare Kilner, and starring Jenna Dewan, Brianne Davis, and Rob Schneider, American Virgin brings purity and crudity crashing together.

Patricia White (Dewan) commits herself to sexual abstinence in a “purity ceremony,” then promptly goes off to college. Matched with her polar opposite, Naz (Davis), as her dorm-mate, Priscilla inadvertently triggers an avalanche of panic and debauchery, and then takes it all on the road.

This film is not Schindler’s List (1993, Universal), and would probably be a bit disappointing to Gloria Steinem, but it is undeniably entertaining. Mixing extreme and sincere conservative views of sex with blatant and meaningless promiscuity, American Virgin addresses one the most divisive and controversial issues facing young people (and their parents) in the United States today.

In a country riding the fence between Jesus and Ke$ha, this movie is genuinely relevant, regardless of the multitude of naked breasts it features.