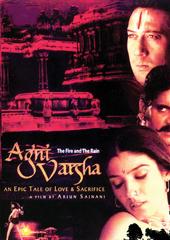 Adapted from the play by the same name (by one of India’s foremost playwrights, Girish Karnad), the film is set in a land that has been in the midst of a ravaging drought for ten years. In order to appease Indra, the god of rain, a grand fire sacrifice is being conducted at the palace. As this sacrifice draws to a close, thus begins our story: a grand tale of lust, seduction, love, betrayal, sibling rivalry and ultimately murder.