Posted at 15:33h in Movies by FlixFling
0 Likes
Share 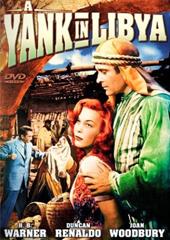 Click here to watch A Yank in Libya now

American correspondent Mike Malone (Walter Woolf King) uncovers a Nazi plot for an uprising of the Arab tribes in Libya. Pursued by Sheik David (Duncan Renaldo) and his men, Mike takes refuge in the suite of Nancy Brooks (Joan Woodbury), who is in the British Intelligence. He asks her to hide a gun and escapes through a window. Reporting the affair to British Consul Herbert Forbes (H.B. Warner), the latter tries to discourage him from further investigation, as the British are aware of the plot and are planning on staging a coup. He goes with Mike to Nancy’s apartment, and she denies having ever seen him before. Sheik Ibrahim (George J. Lewis), next in command of the Arab tribe to Sheik David, is plotting with Nazi agent Yussof Streyer (William von Brincken as William Vaughn) to kill David who is friendly with the British. Mike and Nancy have gone to David’s camp, escape from Ibrahim’s henchmen, and get back to El Moktar before the Arabs attack the garrison.