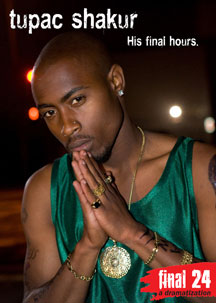 After the initial adjustment to hearing phrases like “gangster rapper” and “thug life” in a clipped, British accent, this recently-released Rockumentary (directed by PJ Naworynski) offers an effective and concise look at the late Tupac Shakur and the events leading up to, and following, his murder.

Using live footage, photographs, personal interviews, and dramatic re-enactments, Naworynski has composed a respectful and credible film about one of the most tragic and senseless assassinations of a generation.

Shakur’s unapologetic honesty about his own personal life, his views of others and of society in general, provoked both an intense following of admirers, and a bevy of enemies. His perception of himself as impenetrable, and possibly even immortal, eventually allowed a moment of vulnerability that ended his life and career. His legend, however, was immediately and vastly catapulted into greatness, and his murder remains a puzzling and fascinating unsolved mystery.

Naworynski lays out the different theories behind Shakur’s murder, and describes his associations with gangs, the west coast, the east coast, the Notorious B.I.G., Suge Knight, and Death Row records, leaving the viewer to make his or her own conclusions about what may have actually occurred.

Overall, 2Pac-Final 24: His Final Hours is a well-organized and intellectually narrated Rockumentary that provides vital information about a controversial and revered young man whose life was taken much too soon.